Pyknometry is the most reliable way of calibrating density meters. It is the only calibration method which overcomes possible measurement errors such as liquid viscosity, flow rate, temperature, mounting torque, pressure, position and vibration.

This measurement system is capable of determining density to better than 0.1 kg/m³ at the 95% confidence level.

All aspects of the PPS5 are calibrated traceable to recognised national standards held by the UK National Physical Laboratory and other National Measurement Institutes. A full set of calibration certificates is provided. 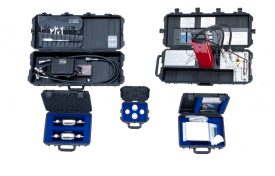 Pyknometry is a simple and foolproof calibration method.

Two empty and clean pyknometers are weighed and connected in series to the flowing oil directly downstream of the density meter to be calibrated.

The pyknometers are then filled with a representative sample of oil at the same temperature and pressure as the oil flowing through the density meter. The system measures the pressure immediately upstream and downstream of the pyknometers so that the average value gives the pyknometer pressure.

Once the pyknometers have stabilised at the oil temperature, the valves are closed. The pyknometers are then are removed from the pipeline, the outsides are cleaned, and they are reweighed.

The oil density at density meter conditions is then calculated from the mass of oil in the pyknometers, the volume of the pyknometers at the measured temperature and pressure, and the air density.

An independent density is calculated for each pyknometer. The two independent results can then be checked against each other, as per the GOST requirements.

HDF Pyknometers Ltd, the company in the H&D Fitzgerald group which has been responsible for pyknometer production, has been transferred to Oil & Gas Measurement Ltd, who are based in Ely, Cambridgeshire.

Manufacture of pyknometer systems by HDF Pyknometers Ltd will continue at Ely, with H&D Fitzgerald supplying technical support to its former subsidiary company.

For more information about the Pressure Pyknometer System, please see our brochure, which is available in both an English Version (577 KB PDF) and a Russian Version (757 KB PDF).